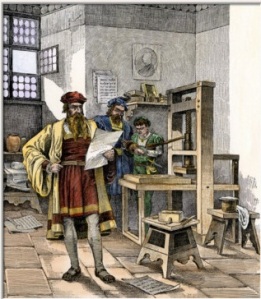 The decline of the Holy Roman Empire in the 5th century was followed by a period of absolute power and control by monarchs and the Catholic Church known later as the Middle Ages or Dark Ages, so called by those in succeeding generations who wanted to believe theirs was a more “enlightened” age. Starting with the Italian Renaissance, in the 14th century and continuing through the Age of Reason and the Enlightenment of the 16th through the 19th centuries, the Western world was in a state of constant turmoil and social change.

The invention of the printing press by Johann Gutenberg in 1450 made mass printings and translations of the Bible and other books possible so that they became accessible outside of elite circles. This furthered the Protestant Reformation which had begun in the 14th century with John Wycliff in England and Czech priest Jan Hus who was burned at the stake in 1415. These departures from Catholic tradition were followed by other reformers including Martin Luther, a Catholic priest, who posted his Ninety-five Theses in Wittenberg in 1517 condemning church abuses.

The Medieval Catholic Church, with its domination by rich and powerful men, had become more of a political and military force than a representation of Christ’s love and compassion as reflected by the apostles and the early church. This is not to say that the Church did not do many good things as exemplified by church run universities, hospitals, orphanages, observatories, libraries and other repositories of ancient and new knowledge.

Forced conversions, persecution of “heretics,” i.e. any form of Christianity[1], science or philosophy not sanctioned by the Church, excommunications, torture and death by burning and other means were all practiced at times by the Church. The reader should note that excommunication to the devoted Catholic of the time meant he had no chance of salvation and was doomed to hellfire forever – as opposed to Protestant belief that only God could ever decide that. (What a freeing concept!) Imprisonment, torture and even death were preferable to excommunication. Similarly, monarchies had absolute power over the people and could, almost at will, have anyone stripped of his position, his property, his freedom or his life. Only the Church had any power over monarchies.

Assisted by the rise of Protestantism, the alienation of the people by abuses and domination of the Catholic Church and the Monarchy eventually led to limitations or overthrow of monarchies and the rise of various types of social philosophies and experimentation within and outside the various churches. In this vacuum, many experimental philosophies were espoused, some of which were irreligious or openly hostile to religion. Some went so far as to throw out Christianity altogether. The Directory, set up in France after the French Revolution, is probably the best, though later, example of such an extreme view. For a period of time under this regime in the 18th century, religion, particularly Christianity, was actually outlawed in France, which led to persecution of Christians and Jews.

The Italian Renaissance, beginning in the 14th century, marked a return to classical thinking of the Greek philosophers such as Plato and Aristotle. This influenced the formation of humanist and materialist philosophies, which became popular among intellectuals. Materialist philosophy states that there is nothing beyond the material world that we can see and touch. Humanists[2] believed that man was basically good and was only corrupted by society. Materialism[3] said “down with god,” and Humanism said “up with man.”

The goodness and eventual perfection of man and society was/is an important part of the basic philosophy of Progressivism and was/is practiced by communists, socialists and their ilk. It is, in my view, a misinterpretation of human nature and a false belief in our ability to change it. This is Magical Thinking because it is contrary to experience. The unchanging nature of man is the reason that both Shakespearian and Greek plays still have relevance today. The circumstances and society are different, but the human reactions are the same. The Christian viewpoint was/is that man himself is imperfect and cannot be perfected by human endeavor, no matter how noble. If society is faulty, it is because imperfect man is its author.

Note that the word “progressive” has been corrupted from its original meaning. The progressive philosophy originally meant that progress was possible through work, learning and inspiration, built on the works of others progressively. This is contrary to today’s interpretation of progressivism as an inevitable quality of the universe, moving naturally from simpler to more complex and from imperfection to perfection and utopia, which is again Magical Thinking.

In the 19th century, socialist thought was dominated by the “man good, society bad” humanist philosophy of Rousseau, and was guided by the “scarcity and struggle” philosophy of economist Thomas Malthus[4]. The dominant theme of the day was social progress of the “noble savage” toward ultimate social perfection, once he was freed from the tyranny of governments and religion. This utopian dream was a perfect philosophy for radicals who wanted to overthrow, rather than reform, what they perceived to be the corrupt and corrupting society of the time. Many social experiments were carried out in which utopian socialist communities were formed, lived and ultimately failed.

A very early forerunner of this was the Plymouth colony in the 17th century, led by William Bradford. From the beginning they tried a form of communal living wherein all production was shared equally by everyone. When it became obvious that people would not produce well unless they were rewarded in proportion to their labors, this philosophy was quickly rejected, and was replaced by private ownership and free enterprise that quickly produced more prosperity and created wealth. Nineteenth century examples of these utopian socialist experiments include New Harmony, Indiana, Brook Farm, Massachusetts and North American Phalanx, New Jersey.

[1] Example: Waldensians were a group professing poverty, preaching, and opposed to image worship, relics, pilgrimages, intercession of the saints, etc. that were persecuted by the Roman Catholic Church beginning in the 12th century.

[2] Originally from the Italian word umanista for a teacher of classical Greek and Latin beginning in the 14th century and promoted by Petrarch.

[3] Note that the word Materialism has been corrupted by the left to mean living for gain of material things, not a philosophy that denies any spiritual aspects. Reinterpretation of words is a common practice of the left that blurs real meanings.

[4] An Essay on the Principles of Population, 1798, predicted starvation because populations were increasing exponentially while food supplies were increasing arithmetically. This philosophy assumed no improvements above subsistence level farming, no development of more prolific and disease resistant crops or mechanical means to increase production, and no other factors that would limit population such as disease and war.